Stereos are the items of furniture that play K.K. Slider's music once the player has transferred the music into one. In all Animal Crossing series games except New Leaf, the player can get a free tape deck when they move into the town.

In New Leaf, when putting at least 3 songs in a stereo, a shuffle function will be available.

Some stereos in New Leaf, primarily ones that use a record and needle, add a crackling effect to the music. New Horizons expands on this by decreasing/increasing the general audio quality depending on the type of stereo being used. For example, the Cute CD Player sounds a lot more tinny compared to the High-End stereo. 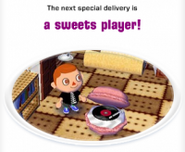