Blend,
Just a little bit of milk,
One spoonful of sugar

“Sometimes the sum is greater than its parts! Get it? A huh huh huh!”

Stitches (パッチ, Pacchi?, Patch) is a lazy cub villager in the Animal Crossing series. He is clearly based off of a young child's worn stuffed animal, indicated by his name and the many patches of fabric making up his body, this also gives the reason for the kiddie furniture in his home. His phrase is based on the stuffing used in dolls and teddy bears. He is one of the few villagers that is technically not an animal, along with Sprocket and Ribbot.

Stitches resembles a teddy bear with a purple line on his forehead with the rest of the color is orange on his head. His two ears have different colors, one is green and the inside is orange, one is blue with green inside. His muzzle has a cream color and his mouth is brown. He has two x's on his eyes, making him resemble a teddy bear. His arms and legs also have different colors, his arms are blue and green, and his legs are green and orange along with his stomach being orange with a cream-like inside it. Stitches initially wears a Star Tee, and carries a Black Umbrella when it rains.

His house has a kiddie theme and has lot of toys, such as a train set and an elephant slide from the nursery theme. He also has a hammock, a green lamp, and furniture from the playroom theme. He has the Playroom Wall and Playroom Carpet. K.K. Lullaby plays on the Kiddie Stereo in his house.

Due to his relaxed personality and slow-moving nature, Stitches is often confused with plush look-alike. Just so we're clear, he is NOT a toy.

At level 7 friendship, he will reward you with a star tee and sparkle stones (x1).

At level 15, he will request that you craft a popcorn machine.

At level 20, he will reward you with pic of Stitches and sparkle stones (x1). 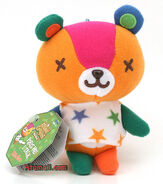 A stuffed toy of Stitches.

Stitches and the other bobble heads Rosie and Curly. 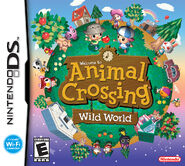 Stitches can be found on the right side of the Wild World cover.
Add a photo to this gallery
Retrieved from "https://animalcrossing.fandom.com/wiki/Stitches?oldid=408626"
Community content is available under CC-BY-SA unless otherwise noted.