Sven is a blue goat with white horns, hooves, and tail. He wears the 'Desert Camo' as his initial shirt. He has the appearance of an old man, with bushy-white drooping eyebrows and a white mustache.

He has a general 'wild west' theme, with multiple Conestoga wagons, a campfire, and a gyroid. He plays K.K. Western when he has a stereo. His western theme suggests his age. In Animal Forest, he has an Asian themed home. If Sven has a stereo, it will be playing Imperial K.K or K.K. Folk. 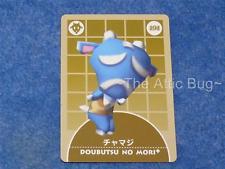 Sven's Japanese E-Reader Card
Add a photo to this gallery

This villager article is a stub. You can help the Animal Crossing Wiki by expanding it.
Retrieved from "https://animalcrossing.fandom.com/wiki/Sven?oldid=479969"
Community content is available under CC-BY-SA unless otherwise noted.