New Leaf
T.I.Y. (also known as Home Center) is a new store in New Leaf that is managed and owned by Timmy and Tommy. It is the fourth Nookling store in the game, with the previous store being Super T&T and the last upgrade being T&T Emporium.

A noticeable change from the outside of the store is that the Gardening Store and T.I.Y are now merged together into one larger building with two entrances, with one for each store. Leif still manages his store. The building is now red and retains the glass frontage from the previous two stores.

T.I.Y. is a home-improvement store, and sells many items for both the interior and exterior of homes.

The shop sells four pieces of regular, standing furniture a day located on the back wall, with an additional wall-hanging furniture piece in the center of them. The shop also sells two wallpapers and two carpets, two fortune cookies, two sets of stationery, one melody card, three tools, one medicine bag and a new feature for T.I.Y., one K.K. Slider song that can be played using a stereo in the player's home.

Through the door to the right of the building, Leif the sloth has a much expanded inventory compared to that of his previous Gardening Store, as his store has merged into the Nooks' shop. Leif sells one tool per day (either the axe or watering can), one sapling and two bags of flowers, as well as three new items previously not available in Leif's store - two bush shoots and a potted flower or plant that can be displayed in the player's house.

To upgrade to T.I.Y., the player must spend a total of 50,000 Bells in Super T&T and 21 days have passed since the opening of the store. 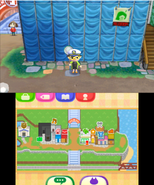 Entering T.I.Y. for the first time with the Grand Opening text.

Entering T.I.Y. for the first time without the Grand Opening text.

Leif introducing his expanded store because of the addition of T.I.Y.