Rare (★★★★★)
The tarantula, Brachypelma smithi, is a rare bug that lives on the ground during winter nights. It can be detected by the sound of its movement, which is heavier and deeper sounding compared to the scorpion. If the player is bitten by the tarantula, they will pass out and wake up in front of their home. The tarantula in later games is based on the real-life Brachypelma hamorii or Brachypelma smithi; both colloquially referred to as Mexican redknee tarantula.

It behaves similarly to the scorpion, but unlike that bug, tarantulas can jump over the lower areas of the ramps that separate upper and lower town levels when chasing after the player. They are one of the few bugs that villagers will note the presence of nearby.

Tarantulas are initially docile creatures that wander around the town, traveling away from the player if approached without a net. In New Leaf, a docile tarantula will disappear after a while. However, if approached while holding a net, they become aggressive and freeze. If the player then misses with the net, runs, or jogs, the tarantula will charge. Tarantulas in pursuit will not stop until they have attacked the player or fallen in water. Putting away the net mid-chase has no effect on an already aggressive tarantula.

A "glitch" is known where digging up a fossil during a chase will "freeze" the tarantula. After enough time has passed, the tarantula will stop chasing and resume wandering around.

In New Horizons, tarantulas won't spawn when the player has company over.

The tarantula can be donated to the museum, followed by a small, agitated talk by Blathers, the curator.

"Hoo my! It's simply amazing that you were able to catch one of these monsters... Not only is it poisonous, it's as hairy as can be... Blech! Hairy and toxic... Is there any combination more vile?"

The tarantula can be found in the second room of the bug exhibit. If donated with the scorpion, the two will engage in battle. However, if just the tarantula is donated, it will follow the player's movements.

"Hoo, such foul fuzziness! And have you seen how fast they move? It's enough to make an owl faint. They're quite docile beasts, and it's documented that they rarely attack people... But when I look at them up close like this, I start to wonder if the experts might be wrong, eh wot?!"

It can be found in the first enclosure on the middle terrace, which holds the scorpion, centipede, flea and fly to name a few.

The scorpion and tarantula can be seen battling with each other when both have been donated. They will circle each other, and eventually both jump into the air and collide, then begin their battle again. If only one has been donated, the respective bug will stare down the player instead.

"Tarantulas are large arachnids that live in warm areas. They're sometimes kept as pets. They have sharp fangs and while it is painful if you're bitten by one, they aren't deadly to humans. What's scarier is the hair they kick off of their abdomens to protect themselves. The hair can cause serious itching and rashes wherever it sticks and can be rather difficult to remove."

The tarantula will wander in its confined area alone. If approached by a player, it will turn around to look at them. However, if there is a scorpion donated as well, they will face off in a duel.

"As giant spiders go, the tarantula is said to be quite docile. But have you ever seen such foul fuzziness?! It is a fact, tarantulas have barbed belly hair! I say again... BARBED. BELLY. HAIR! These awful arachnids let loose their spiky, itchy hairs to protect themselves from predators. But seeing how tarantulas also prey on frogs, mice, and even birds, one must ask... Who needs protecting from whom?! Hoo! Who indeed!" 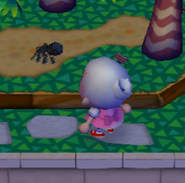 Tarantula in the museum in City Folk. 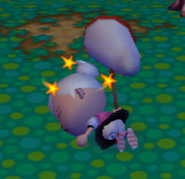 The player has been attacked by a tarantula in City Folk.

Gwen reacting to a tarantula in City Folk.

Aggressive tarantulas can be trapped against cliffs in City Folk.

Tarantula caught in City Folk.
Add a photo to this gallery

Bitten by a tarantula in New Leaf.

A Tarantula and Scorpion fighting in the museum in New Leaf.

A player next to a Tarantula in New Leaf.

Tarantula in New Leaf.
Add a photo to this gallery

Tarantula in the museum in New Horizons.
Add a photo to this gallery

Tarantulas are a group of large arachnids and well-known in popular culture and media. Tarantulas are typical of dry canyon and desert areas, but many also occur in rainforests. Many species, while they bite, are not particularly venomous. Some tarantulas shoot hairs in defense, something which can cause irritation and blindness.

Retrieved from "https://animalcrossing.fandom.com/wiki/Tarantula?oldid=475175"
Community content is available under CC-BY-SA unless otherwise noted.