Tarou is a dark purple wolf and bright, happy eyes. His muzzle and paws are tan, and his inner-ear is white or light tan. His eyebrows and nose are black. He initially wears a Black Tooth Tee.

Tarou has a jock personality and has a great interest in sports and bodybuilding. Jock villagers are hyperactive and motivated but often come across as egotistical and dense. As a jock villager, Tarou is very interested in his hobby, and may compete against the player at catching bugs and fish. Jock villagers get along with peppy, cranky and sisterly villagers, but conflict with the laid-back lifestyle of lazy villagers. Snooty villagers may also be difficult to get along with for Tarou.

Tarou has the same house as Gaston's, with the only difference being the office wall and music room floor. He also has Only Me playing on his reel to reel. 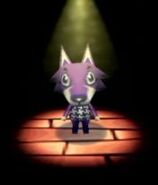 Tarou setting up the game. 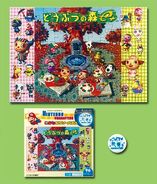 Tarou is seen in this puzzle.
Add a photo to this gallery
This article is a stub. You can help Animal Crossing Wiki by expanding it.
Retrieved from "https://animalcrossing.fandom.com/wiki/Tarou?oldid=479988"
Community content is available under CC-BY-SA unless otherwise noted.