Тимми и Томми
Timothy (better known as Timmy) (まめきち, Mamekichi?) and Thomas (more often known as Tommy) (つぶきち, Tsubukichi?) are the twin apprentices of Tom Nook, the tanuki who runs the town's store. In Wild World, Tom Nook explains to the player that Timmy and Tommy are not related to him by blood, and thinks of them as his pupils and himself as the mentor, stating that he wants to teach others good economic principles in order to help them from suffering the same pitfalls he did when growing up. Their last names are said to be Nook. Certain jock or lazy villagers will tell of a rumor that Tom Nook found them in the streets and raised them by himself. Their full names were first revealed in New Leaf, when they are seen on the bulletin board during some shop upgrade announcements.

In the games where they appear together in Nookington's, the closest twin will become the primary speaker when choosing an item on the top floor.

In New Leaf they are now the owners and managers of the Nookling Stores, after taking on the franchise from Tom Nook.

Timmy and Tommy are raccoons (tanukis in the Japanese version). They are identical twins. They have brown fur with dark brown mask-like surface running down their eye area. They basically look like smaller versions of Tom Nook.

Their clothes change when the Nookling Stores are upgraded.

Tommy works Monday through Wednesday and runs the gardening floor of T&T Emporium.

Timmy and Tommy's most distinct feature is how one will echo the last phrase of the other when together. When alone in New Leaf they will also add a phrase at the end of the sentence in smaller text, though it does not copy the previous sentence's end like it does in previous games when they are together. According to Assemble! Animal Crossing, Timmy is the older of the two.

The twins share resemblance to Tom Nook, sometimes showing evidence of mimicking the latter's phrases. According to Tom Nook himself, the two can be distinguished by a mole on one of their hands.

Tom Nook states that Timmy and Tommy are not related to him by blood, and thinks of them as his pupils and himself as the mentor, stating that he wants to teach others good economic principals in order to help them from suffering the same pitfalls he did when growing up. Timmy is slightly higher pitched than Tommy.

Their German names Nepp and Schlepp are slightly misleading since "Nepper" and "Schlepper" in German language are words for con men and double-dealers. They were probably chosen for the amusing and rhyming effect. In New Leaf they are also used as puns, for example when they are running the "SchNeppchenmarkt". In this case parts of both names were worked into the correct spelling "Schnäppchenmarkt" to evoke a similar German pronunciation.

In New Leaf they eventually prefer being called Timothy and Thomas. That gives the assumption that they are slightly older and matured somewhat, or at least they want others to think that. The fact they start off capable of running the store with only one of them at a time, does imply they have grown up somewhat.

In all the games apart from Animal Crossing: New Leaf, the twins work at the top level of Nookington's, where they sell furniture, flooring, wallpaper, and paint. Here they perform the same role as Tom Nook, buying from and selling to the player.

In these Animal Crossing games, they also work on the second floor of Nookington's.

Timmy and Tommy are the new managers of the shop, which had previously been in the ownership of Tom Nook, who now works at Nook's Homes. At the beginning of the game, they will start off with Nookling Junction, having 4 upgrades as the game progresses, first being T&T Mart, next Super T&T, then T.I.Y., and finally T&T Emporium.

Sometimes I think this house is too fancy for me and Timmy. We come from a humble background, yes. But then I look around and think we've worked hard to earn the right to live in such a palace!

-Tommy talking about the wonders of the house you built.

Timmy and Tommy do not have a professional role in Happy Home Designer. The player may build a house for them in any way they desire as their criteria for the house is simply "I'll leave it up to you!".

Timmy and Tommy have 6 unlockable costumes for the game, unlocked through leveling up the Lottie amiibo:

Timmy and Tommy sell exclusive furniture as well as Fortune Cookies at their stand in the Market Place.

When Nook's Cranny is built, Timmy and Tommy both move into the shop to buy and sell wares during their service hours of 8am to 10pm.

Timmy and Tommy have minor roles in Dōbutsu no Mori. They appear in two different booths at the Fireworks Show on the Fourth of July. 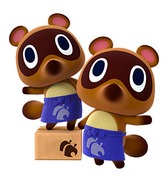 Timmy and Tommy in their Green Nook Inc. Aloha shirts

All the Nookling upgrades

Talking to Timmy in Nookling Junction. 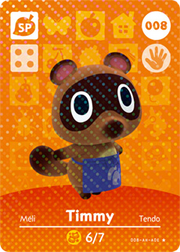 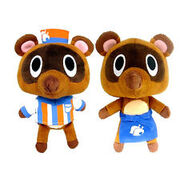 Timmy & Tommy amiibo
Add a photo to this gallery

Retrieved from "https://animalcrossing.fandom.com/wiki/Timmy_and_Tommy?oldid=457594"
Community content is available under CC-BY-SA unless otherwise noted.