Kilimanjaro
Lots of milk
One spoonful of sugar

Tom Nook (たぬきち Tanukichi?, a Tanuki) is a character who plays the most important role in all of the games. He is termed a raccoon in the western versions of the game but a tanuki in the Japanese version. In all games leading to New Leaf, he is the manager of the town shop. After the final expansion, Nookington's, he will employ his "nephews" Timmy and Tommy, who work on the second floor in every Animal Crossing series game except Animal Crossing: New Leaf and New Horizons. In New Leaf, Nook has taken his interest in real estate to a whole new level, opening Nook's Homes, whilst Timmy and Tommy run the town shop. In New Horizons, Nook acts as the head of Nook Incorporated. He acts as the leader on the island, acting as task giver and island upgrader.

In Wild World, he will give out his picture if the player gives him the safe from the Golden Axe Trading Event.

“GL-L-L-KSK! KEH-KEEH!♫ FST! FST! RrrrrrrrrrrrKLAGH!♪ CH-CH-ch-ch-mmmMMMmmm!♫ Oh, well, it is very old and in the language of my ancestors, which happens to be Raccoonish, yes, yes.”
― Tom Nook, New Leaf

Tom Nook is a tanuki (a raccoon in Western versions) with brown fur. His eye area has a dark brown mask-like shape for his raccoon eye characteristics. His nose tip, his hands, feet, and his tail are dark brown. The apron he wears over his lower half is inferred to be for modesty, a reference to the legends of the tanuki.

In New Leaf, Nook wears a white shirt with a red necktie and a green sweater vest over it. His sweater has a left-sided pocket protector with a pen sticking out. He also wears black pants. Whenever outside of Nook's Homes, such as the player selecting their new home spot or at The Roost, Nook is seen with a yellow jacket over his sweater.

Tom Nook makes an appearance in Pocket Camp; however, he is merely a special furniture item. He also appears on the 1,200 Leaf Ticket GUI.

When the player first arrives in town, Tom Nook will greet them and introduce them to their new house. He will give a quote to them on the initial mortgage of the home. Tom will hire the player to work part-time at his shop to help pay off the loan. Eventually, he will run out of tasks for the player and will lay them off, letting them free to find other methods to make Bells, in order to pay off the rest of the debt. Following the job, the player can shop at Tom Nook's store, and can sell items to him, for which he will pay for in full value.

In New Leaf, however, Tom Nook has become a real estate agent, leaving the management of his store, now known as Nookling stores, to his "nephews", Timmy and Tommy. The responsibility of welcoming new players has been given to Isabelle. Like in previous games, Tom will be responsible for orchestrating the construction of the player's house and providing the mortgage the player pays off via the ABD machine in the Post Office. Tom Nook runs a real estate agency called Nook's Homes, which also provides house customization and renovation services. The office also functions as the headquarters of the home inspection organization, the Happy Home Academy, ran by Lyle. Tom Nook also assists the player in searching for a plot to build their house when the first move in. Once a plot has been chosen, he will pitch his tent for the player to use as temporary housing while they are gathering funds to pay off their first home loan. Tom Nook's agency is also responsible for building the house's neighbors live in, as well as assisting them with moving in and out.

Tom is noted to be very work-driven, and many years ago he left behind his friends, most importantly Sable, to travel to the big city. His dreams of success are quickly broken by the harsh life there. After making nothing of himself, he returns to the player's town to set up his store. Nook no longer appears to be as good of friends with Sable as he used to be, though the two often mention each other to the player.

Nook seems to have a varied reputation among the villagers, with some speculating that he is, in fact, a man in a suit. In fact, when asking Dr. Shrunk about one emotion, he talks about how we all wear masks, and then says that Tom Nook "wears a raccoon suit, but it serves the same general purpose". Many will say that he has a checkered past, hinting at illicit activities - the fact that he seems to have a history with Redd (who describes Tom as a "raccoon in an apron" and treats him as something of a business rival) supports this, this is further hinted in Happy Home Designer as talking to Tom in his house he says he worked with a fox in the past and it was a horrible experience.

In Animal Forest e+, the player can wake up Tom Nook after hours by banging on the doors three times with the shovel. He will be in his pajamas and allow you to shop, but he will move much slower. Not only this, anything the player sell to him will be lowered from its base price by 30%. Similarly, prices of items in the shop will be inflated by 17%, and the player is only allowed to either sell or buy what is on display. The catalog and other options will not be available either.

Timmy and Tommy are Nook's nephews that appear in the final expansion of the shop, Nookington's, as assistants on the second floor. They assist him in his business. All three make a cameo in the Smashville stage in Super Smash Bros. Brawl.

In New Horizons, Nook has become a travel agent and it is through his company you purchase a get-away package to a deserted island - starting the events of the game. Tom Nook is the founder and owner of Nook Inc. Alongside this, he runs the Resident Services building. In this role he acts as the leader and developer of the island, and it is through his that you are allowed to upgrade the island and various buildings that can be built.

Timmy and Tommy are shown to be sort of employees of his. At the start of the game, they are usually seen in the Resident Services Tent alongside Tom Nook, with Tommy roaming freely outside for most of the day. However, after completing construction of Nook's Cranny, they will always be found inside the store from 8am to 10pm.

In the City Folk's game guide this description is given:

"A kind raccoon with a heart of gold (well, pockets of gold even though he only owns a shop, if ya know what I mean), Tom Nook helps you get started when you first move to town by loaning you a home to live in. Tom also runs a little supply shop in town that sells all the basics, including furniture, tools, and gardening supplies. Tom will help you in a variety of ways as your life unfolds, and you'll help him as well: keep shopping at the store and it'll get bigger and bigger. Eventually, old Tom will even need to hire his two nephews, Timmy and Tommy, just to keep his business running!"

Main article: Tom Nook's Store
In all games prior to New Leaf, Nook starts out with Nook's Cranny, expanding after the player buys enough from him. There are a total of four expansions for his shop:

Tom Nook appears as a Trophy in Super Smash Bros. Melee, using his in-game model from Animal Forest (evidenced by the Japanese character on his apron).

"This guy's the friendly neighborhood shopkeeper who kindly helps the player set up their first house. He has a nose for business, and his customer service is second to none. During the course of the game, his store starts as a corner shop, expands to become a convenience store, and finally becomes a thriving supermarket and stalk market."

Tom Nook appeared in Dōbutsu no Mori as the town shop owner, just as he does in the games. Like also in the games he helped Ai settle into town by making her work.

Tom Nook also appears in the 2010 Nintendo Collector's Edition of Monopoly with K.K. Slider and Rosie in the light blue grids. He is worth 120 US dollars on the game board, the highest of the Animal Crossing characters that appear in the game.

Tom Nook appears in the fourth and fifth instalments of the Super Smash Bros. series. He appears alongside his nephews Timmy and Tommy as part of the Villager's final smash, which sees Nook construct a house on top of other fighters causing massive damage.

Sometimes, upon entering his store, he will appear in thought, and may tell you a story when approached:

"...Well, actually, I was just thinking about the good old days, hm? I know it seems that the world is my oyster, what with my fine shop... But in my childhood, I lived the kind of life you couldn't even imagine! Yes, yes, but this was all some time ago, but this was all some time ago, before I moved to this town, hm? Of course, I was born in our lovely [town name], but I moved away for a time... Yes, yes, the city years, I like to call them. I was a raccoon of action, hm? The big city certainly had its charms...but it had its pitfalls, as well. Indeed, I had to endure certain hardships that I've never spoken of, hm? ...Hard to believe, yes? You're probably asking yourself, what the heck is Nook talking about, hm? For now, maybe it's best that we forget we ever talked about this."

Redd refers to him as a "raccoon in an apron".

In Animal Crossing, Pelly refers to him as "Mr. Nook" when you chose to pay your loan.

In New Leaf, Isabelle refers to Nook as the Real Estate Agent.

Also in New Leaf, Saharah calls Tom Nook "King Nook" when you interact with her.

His English name is derived from "tanuki" (often written as "Tanooki" in English) and his last name is likely a pun based on a myth about the Tanuki. His Japanese name, Tanukichi, is a mix between Tanuki and the Japanese word, kechi, meaning "stingy."

Tom Nook
Add a photo to this gallery

A note from Tom Nook

Selling to Tom Nook
Add a photo to this gallery

Tom Nook as he appears in City Folk.

Tom Nook asking the player if they want the house they just viewed. 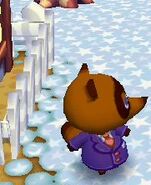 Tom Nook walking around.
Add a photo to this gallery

Nook welcoming the player into his store.

Tom Nook sings a celebratory song as the player completes paying off his home.

Tom Nook asking the player where they would want to put their house at.
Add a photo to this gallery 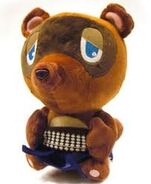 Tom Nook Amiibo
Add a photo to this gallery

The Tom Nook trophy from Super Smash Bros. Melee.
Add a photo to this gallery

Retrieved from "https://animalcrossing.fandom.com/wiki/Tom_Nook?oldid=450322"
Community content is available under CC-BY-SA unless otherwise noted.