Kilimanjaro,
The regular amount of milk,
Two spoonfuls of sugar

Tortimer (コトブキ, Kotobuki?), an elderly tortoise, is a character who has appeared in all main-line games in the Animal Crossing series, except for the original Animal Forest, and New Horizons. He is the mayor in the town that the player moves into, except for in New Leaf where he has retired to his island.

His name is a pun, a mix of the word "tortoise" and the name "Mortimer." His most well-used catchphrase is "Heh heh horf" which indicates amusement or laughter.

Soncho (そんちょう) was a common name in the early works of the Japanese version of the Animal Crossing. Soncho is the village chief.

Tortimer is an elderly tortoise. His skin is yellow, and he has a long white goatee sticking out of his chin. His shell is green with blue spots on it. He also wears a green bowtie on his chest. He wears black round glasses on his face. He's also seen carrying a brown cane around.

In New Leaf, he is now more dressed by wearing a shirt and shorts. His top hat is now made of straw. He also wears gray shorts. His shirt changes often, but mainly he wears a red tropical flower shirt. He no longer wears his green bowtie since he wears a shirt.

In older Animal Crossing games, he wears different hats depending on the game version. In Japan, he wears a red zucchetto. In other regions, he wears a black top hat with green trim. This is no longer the case in future releases.

He appears during Holidays, celebrating or often giving out holiday-specific items. In Wild World and City Folk, he can be seen in the back of the Town Hall, napping. In general, Tortimer can be heard complaining about an itch in the center of his back beneath his shell.

He seems to have a large ego about himself, according to Dōbutsu no Mori, to the extent of having his own cult of personality, though he is its only follower. This is supported in the games, since during festivals he always seems to remind the player of his authority, such as during Nature Day in City Folk, where he boasts the slogan "Mother Nature and Father MAYOR."

When there are no events in town, he seems to spend most of his time sleeping at the back of the Town Hall. Sometimes cranky villagers will tell the player that Tortimer's shell is fake.

At any events, like the Flower Festival, he will stand outside the town hall to explain the competition. At the end of the competition he will give a shiny gold trophy to the winner. At other occasions like Bonfire Night, he will give you a free sparkler. At New Year's he will give out a shirt and a party popper. At Fireworks Night he will give a Roman Candle and a Sparkler. The events he appears at are spread out at all different times of the year. He will appear at Bonfire night only in Animal Forest e+.

In New Leaf, Tortimer retired his job as a mayor and lives on his own personal island. He leads the tours, also known as the Animal Crossing minigames. Occasionally, he can be seen at the café.

Tortimer sometimes talks about previous events in his life, giving an insight into his past. From this we can decide that he was (apparently) an expert gardener, and once had a wife, Mrs. Tortimer. It is believed that she died tragically. Some villagers speculate that he became incredibly rich on the turnip market, while others believe he gained money illegally and used it to build the town hall. This is backed up by the fact that there are no taxes in the player's town, and that Tortimer himself never has to face election.

Also, according to villagers in City Folk, snooty and cranky villagers will say that his shell is fake, but that is only gossip.

In New Leaf, he is no longer the mayor and has retired, now living on Tortimer Island. He organizes some of the Island Tours and awards Medals to the player. He initially appears in the village to welcome the player and introduce them to the dock where Kapp'n will appear the next day, and later occasionally appears at The Roost.

Tortimer is often associated with Cornimer, who only appears during the Acorn Festival and replaces Tortimer for this event. Mainly because Cornimer's name is similar to "Tortimer", most believe that Cornimer is just Tortimer dressed up, but others think he may be a relative. It is interesting to note that Tortimer cannot be seen behind the desk at the Town Hall during the Acorn Festival, however he may just be out searching for acorns. His trophy description further supports the theory. It is also worth noting the object the player chases during the Hammer Tours in New Leaf has the appearance of Cornimer's head, supporting the idea that Cornimer is just Tortimer under an Acorn mask and as he has no more need for it, it would make sense to recycle it as a part of his tours.

The mayor of the player's town. Usually in his office in the town hall, he emerges on holidays to usher in special festivities. He's a busy fellow who also serves as the record keeper for fishing and bug-catching tournaments. He cuts a very dashing figure in his hat and bow tie. There may be some link between him and Cornimer, who appears at the fall Acorn Festival.

The Tortimer trophy received in-game.
Add a photo to this gallery

Tortimer's ego in the Animal Crossing movie. Here, he has a Joseph Stalin-esque poster of himself. 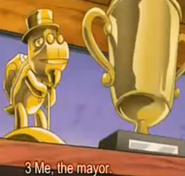 Tortimer's ego in the Animal Crossing movie. Here, we learn he has a commissioner trophy of himself. 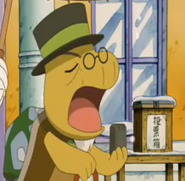 Tortimer giving a speech while speaking into a microphone, as depicted in the Animal Crossing movie.

Tortimer's PC Icon
Add a photo to this gallery

Retrieved from "https://animalcrossing.fandom.com/wiki/Tortimer?oldid=447084"
Community content is available under CC-BY-SA unless otherwise noted.