This article is about the location in New Leaf. For the Super Smash Bros. stage, see Tortimer's Island.

Tortimer Island is a location in New Leaf separate from the main town. It can be accessed using Kapp'n's boat. On the island, the weather is constantly summertime, and the seasonal-appropriate bugs, fish, and deep-sea creatures can be caught there. Certain fish and insects are only found on the island. The ribbon eel, whale shark and giant trevally are island-exclusive as are spotted garden eel and giant isopod while diving. The only island-exclusive bug on the island is the hermit crab.

If a player wishes to travel to the island while there are other players visiting, all players need to take the trip at the same time in order to depart.

On the way there, Kapp'n will sing a song, which are also very short stories and lessons from his life. However, if the player taps one of the buttons (X, Y, A, B) or the touchscreen rapidly while he's singing, the shanty can be skipped and the player can head to the island immediately.

No islanders inhabit the island other than Kapp'n's family and Tortimer, who decided to live there upon retiring.

Inside the shack, the player will meet Kapp'n's family: his wife Leilani, his daughter Leila, and his mother Grams. Leilani works at the front desk, where the player can choose to take part in Tours. Medals from tours can be spent on souvenirs from Grams, which include special furniture and clothes. Leila can buy certain items from the player, but only for a small amount of Bells at 5% of the original value. She sits on the floor surrounded by toys and pretends to be a supermarket shopper, encouraging the player to sell her flowers, fruits, and fish for meager amounts of Bells.

Right outside the shack, you find a gyroid named Lloid who lends the player rental items. The items available are a rental shovel, a rental axe, a rental wet suit, a rental rod and a rental net. This equipment can not be brought back to the town and will be returned to Lloid automatically after your visit.

Items can be sent home via a box near the front counter, which can contain up to 40 items. Any items not placed in the box upon leaving the island or joining a tour will be exchanged into Bells also at 5% original value. This exchange deposits the bells to the ABD account. Any clothing or accessories taken off will also be converted, so caution is advised.

While on a tour, the player can talk to Lloid to use the rental items, where they can then catch bugs, collect fruit, fish, or dive. However, on tours such as the Ore Tours, the player cannot take back ores, and bugs on bug tours, and each tour respectively. However, if the player collect items on a tour, returns to the island, and then go straight onto another tour, the items they collected will be sold and the bells put into their ABD account, so it is recommended that they deposit their collected items into the box near the entrance of the shack. Alternatively, they can also use collected fruits to restore trees on their island that they have cut down.

While staying at Tortimer Island, it is not possible to save the game until the player arrives back at their town.

Club Tortimer is an online function at Tortimer Island. To join, the player must buy a form for 50 medals. This form will appear instead of one of the items when traveling alone. Club Tortimer membership allows the player to go to a random island. Meanwhile, other Club Tortimer members can arrive or leave on the same island as the player. The player has a choice of going to an island that is visited by people from all over the world, or to an island that is only visited by people from their continent. (Note: More people will go to the island that contains their continent.) The items sold at the shop in Club Tortimer refresh every time the player leaves. There will be new items when the player joins again if they join to a different "room." The player can go on tours with fellow players and earn medals.

In the Welcome Amiibo update, a set of rules, broadcast during the journey to the Club Tortimer island, were introduced. Alongside these, a new button on the touch screen was added to transport the player home immediately without 'erroring.' ('Erroring' can be done by flicking the wireless switch off at the side of the device. A cartoon picture of Resetti will pop up on the top screen with details of the 'error' on the bottom.)

On the 7th of March, 2014, a stage based on this area, called Tortimer's Island, was confirmed for the 3DS version of Super Smash Bros. 4. The stage's layout is different every time. Leila, Kapp'n and Tortimer appear in the background of the stage.

Not Enough Money for Island.jpg
Not enough money.

Four players traveling to the island while Kapp'n is singing one of his shanties (Japanese Version).

Players on the island.

Standing at the entrance of Tortimer Island's main reception

Leila selling things to a player for 1/20 of the retail price.

Pictures of the Kappa family in the island's shack, located behind Leilani.

The sign displayed above the box to take home items.

Player catching bugs at the Island at night. 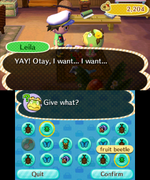