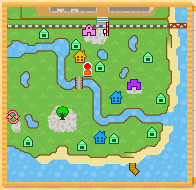 The town or village is the main setting of all main-series Animal Crossing series games. The town is the home for a variety of villagers who live inside houses, and special characters who work within the variety of different buildings, which act as the industrial and commercial areas of the town. Each Town is different and customizable by the player, who can cut down trees and plant flowers wherever they choose. It is further customized by where the villagers decide to move to, and where each building is placed at the start of the game.

In Animal Forest, Animal Forest+, Animal Crossing, and Animal Forest e+ all towns will have at least two bridges and cliffs that divide the town into two sections, a higher and a lower level.

The player goes through the town by taking the train, where they decide their appearance and the name of the town. The Train Station is a unique building in the games and is where the player first enters the town and is greeted by Tom Nook.

Also unique to the towns in each of the games is the Police Station, Post Office, Wishing Well, and dock, which takes the player to the Island. The town also has bushes.

What differs this town layout from later installments is that it's divided into certain square districts.

In Wild World, all towns will have at least two bridges, unless the river forks to create an island. This will, therefore, create three bridges, although this occurrence is rare. There are no cliffs in the town layout of this installment.

The Police Station in previous installments has now been replaced by the Town Gate. The Town Gate also serves a unique purpose of allowing the player to invite other players, or to visit other towns, provided they have the Friend Code of the other player or they are within range, and the Nintendo DS is switched on. The dock and the Island also do not exist, and bushes do not feature in the game.

The Post Office in previous installments is now located inside the Town Hall and does not have its own building.

In City Folk, the towns are larger than they were in Wild World, and a third (or fourth if the player has an island) bridge can be bought. To get an extra bridge, 200,000 Bells must be donated to the Town Fund.

Cliffs cannot be jumped off. Instead, the player must go down the nearest ramp (also called a hill). These are placed randomly. Each town has a river, which flows from a waterfall to the north, down a second waterfall where the river meets a cliff, then it goes out to sea.

Each town in City Folk has a Town Gate, Tom Nook's Store, a Town Hall, Museum, and an Able Sisters store. Each town also has a Bus Stop, which the player can use to ride the Bus to the City, a location unique to the game.

In New Leaf, the size of the entire town layout has become seemingly compact from New Leaf's predecessor, City Folk. Also, the way the town is chosen has changed drastically. A town map can now pick from 4 maps that Rover will have on the Metro train. If the maps do not appeal to the player, they can say that the correct town map isn't shown until they find a town map that appeals to them. The maps consist of a river, Re-Tail, plaza, a dock, the train tracks and train station, and the Town Hall.

Using Public Works Projects, the player can customize the town beyond what was available in previous games, adding new buildings such as the Police Station which returns from Animal Crossing. Main Street replaces the City, and can be walked to by going past the Train Tracks.

Retrieved from "https://animalcrossing.fandom.com/wiki/Town?oldid=389991"
Community content is available under CC-BY-SA unless otherwise noted.