The Town Ordinance is one of the improvement options the player has as mayor in their town in New Leaf. The other role is the ability to create Public Works Projects. There are four ordinances in total, and they affect the way in which the town operates. They cost 20,000 Bells each to enact and can be changed in the Town Hall. There can only be one ordinance in effect at a time, and an active Ordinance can be cancelled for free. Cancelling or enacting an ordinance takes effect the following day at 6:00 AM.

When an ordinance has been active long enough, villagers may start to comment about it. For example, they may say they are losing sleep due to the Early Bird or Night Owl ordinance.

In New Horizons, it makes a return as Island Ordinances, which the player can do as resident representative in their island in New Horizons. 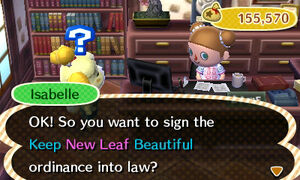 The Beautiful Ordinance helps keep the town looking neat and tidy. The purpose of this is to better accommodate players who might not be able to visit and help maintain their town on a daily basis. The key benefits of choosing this ordinance are: 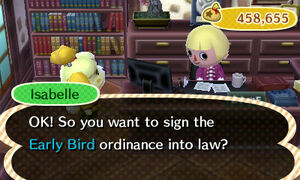 Under the Early Bird Ordinance, villagers wake up earlier and shops open earlier. This ordinance is optimal if the player is more likely to be playing in the morning.

Once enacted, villagers will change their sleep schedule to the following:

Likewise, Nookling stores will change their opening hours to the following:

Other businesses without all-day hours, except Club LOL (which has fixed opening hours), will change their opening hours to the following: 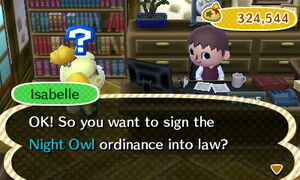 Under the Night Owl Ordinance, villagers will go to sleep later and shops will close later. This ordinance is optimal for players who are busy in the day due to other commitments.

Once enacted, villagers will change their sleep schedule to the following:

Likewise, Nookling stores will change their opening hours to the following:

Other businesses without all-day hours, except Club LOL (which has fixed opening hours), will change their opening hours to the following: 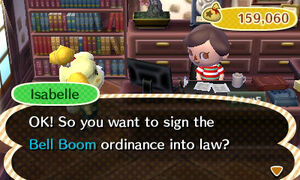 The Bell Boom Ordinance (known as Wealthy Ordinance in the list) modifies the bell economy for the benefits of all town citizens. This ordinance changes the number of Bells the player may receive from selling and the cost of buying items, as well as increasing the size of the premium item list at Re-Tail. This is useful for wealthy mayors and players, as well as those who are looking to upgrade their house since the mortgage price stays the same no matter what. This ordinance additionally benefits greatly for players who regularly travel to Tortimer Island to catch expensive bugs and fish for purposes of profiting bells, as this can quickly pay off the downsides of increased purchase prices. Players whose economies depend on taking advantage of premium items at Re-Tail will also benefit greatly from this ordinance.

The key modifications from this ordinance are:

Note that the following paid services are unaffected by price adjustments, and therefore will always cost the same regardless of whether this ordinance is in effect or not:

Also note that most services directly related to items involving pockets (i.e. buying, selling, or disposing of items), with exceptions of the turnip business as well as selling items to Leila, however, do change monetary value while this ordinance is in effect.