watch 03:41
Wiki Targeted (Games)
Do you like this video?
Play Sound

AF, AF+, AC, AFe+, NL
The train station is a location in the Animal Crossing series. From here, trains depart to other players' towns, facilitating multiplayer gameplay. It was absent in Wild World and City Folk, although the bus in City Folk performs a similar function. In New Leaf, the train station returns, and it is replaced by the Dodo Airlines airport in New Horizons.

The Train Station is a building in Animal Forest and Animal Crossing, which is run by Porter the monkey. As its name implies, the building is a station for Trains. There are 3 different possible styles of train stations a town can have; Wooden, Metal, and Brick. Of those 3, there are 5 different possible color schemes they can have, meaning there are 15 possible train stations in all. If the player goes to the Train Station and puts another Memory Card with Animal Crossing data on it into the GameCube, they will be able to travel to the Town in the other Memory Card on the Train. The Train is also used at the very beginning of the game, where the player arrived at their town by coming on the Train, however the Town where the player used to live is never seen. The Train Station is always at the very north most area of the Town, and the northern wall of the Town will always have train tracks running all the way along it for the train to run on.

The town will have one of 3 different style stations. These are chosen at random and will not make a difference in the town setup. To get another style, the town has to be deleted.

The Train station returns in New Leaf with Porter. It is the first location the player will see of their town at the beginning of the game. Visiting players will also come through the station, replacing the Town Gate in previous games.

As well as the trains that stop to drop players off, there are four trains per hour that run through the station without stopping to add to the overall realism of the game. These can be seen at 03, 21, 35, and 49 minutes past the hour.

The default train station is wooden. The majority of the structure used brown wood, although it is trimmed with wood of another color - either brown, red, green, or blue. The train station is always placed at the middle-northern part of the town.

The exterior of the Train Station can be customized using three other designs, making four in total. The option to customize the station is made available as a Public Works Project once the player has been visited by other players at least 100 times. After the player's 100th visitor, the player may talk to Porter after they closed the gates. He will talk about how the train company held a design contest and their station was selected for remodeling, but they need the player's support to get it approved. Then it will be available as a Public Works Project.

Inside the Station there is a locker in which the player can use to store items. The contents of the locker are exactly the same as what the player can find in their storage at their home. The locker is useful for holding items when the player travels to another town, acting as a space for storage without the player going back to their town to deposit items.

There is also a bench with 3 seats, presumably so players can wait for someone to arrive. However, when visiting a town the player always automatically walks out of the train station rather then just stopping in it, so this makes the bench redundant as most people will likely just wait directly outside.

The train station in Animal Crossing.

Wooden Train Station #1 (as seen on the Title Screen)

Brick Train Station #5
Add a photo to this gallery 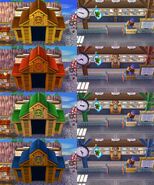 All 4 possible default train stations, and their interiors.

Example of entering another town.

Example of another player arriving.

Example of a player leaving town.

A player visits hometown with Katie.

Arriving at another player's town with Katie.

An east railroad tunnel leading into a town.

A close up of the railroad
Add a photo to this gallery
Retrieved from "https://animalcrossing.fandom.com/wiki/Train_Station?oldid=490293"
Community content is available under CC-BY-SA unless otherwise noted.