Animal Crossing Wiki
Register
Don't have an account?
Sign In
Advertisement
in: Articles in need of cleanup, Fish, Items

View source
watch 01:54
Arcane: League of Legends - The Loop
Do you like this video?
Play Sound

Trash in the Animal Crossing series primarily refers to three items that can be caught by the player while fishing. Empty cans, boots and tires cannot be sold for any Bells, and negatively affect Perfect Town status. Games prior to New Leaf allow the player to conveniently dispose of trash for free. In New Leaf, Re-Tail will charge a disposal fee per item, but the player can still use alternative disposal sites such as a trash can. Items such as used fireworks and forged paintings also count as trash. In New Horizons, trash functions as crafting material for various DIY recipes.

An empty can captured in "New Horizons".

A player catching a boot in City Folk.

A boot captured in "New Horizons". 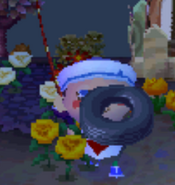 Trash is much less common in these games, and does not appear at all while the player's pockets are full.

When a player fishes out trash, they can bring it to Reese in Re-Tail, who will collect a recycling fee of 80 Bells per piece. Flies can still be caught from setting out trash on the ground.

Alternatively, the player can use one of the many trash bin furniture items to dispose of garbage for free. The player can also build a garbage can as a Public Works Project, which serves the same purpose. However, the player can stop trash altogether by selecting the Keep Town Beautiful ordinance. From the day after it is selected, no trash will be found until the ordinance is canceled.

Trash can be repurposed as crafting materials for various DIY recipes, which are unlocked after fishing up enough trash items. The player can also earn Nook Miles for fishing up to 20 pieces of trash. Trash items can only be sold for 10 Bells apiece.

In New Horizons, there are various DIY recipes that use trash. All of these recipes can be obtained by catching varying amounts of trash.

Attempting to "sell" a used firework in New Leaf, which only gives option to dispose for a fee
Community content is available under CC-BY-SA unless otherwise noted.
Advertisement