Unknown
Trees are a town feature prominent in every Animal Crossing series game. Although many trees are generated at the time of town creation, further saplings can be bought or fruit planted to create additional trees.

All trees have leaves, except perfect fruit trees that have expired. The leaves of hardwood and fruit trees change according to the season, with the former showing a cherry pink form during early April. Cedar trees do not change color during the year, but become decorated with lights during snowy portions of December leading up to Toy Day. All trees will be covered with snow during Winter.

Once planted, trees grow within 3 days. If the tree can bear fruit, it will then produce fruit the day after the tree is fully grown, for a total of 4 days since planting. Trees cannot be planted in a square adjacent to buildings, walls, water, or other "hard" obstacles including other trees (they can however be planted adjacent to bushes). If planted in these areas, tree saplings will die the day after, and disappear. Occasionally, saplings will die even in open areas.

An exception to this rule is in the GCN games. Saplings planted adjacent to buildings will grow, but only for one day. These trees remain small and stunted until the building is removed. Trees that are normal size will revert to this small size if a building appears next to them, such as when Nook's shop expands in size or if a villager sets up a house.

Trees that have started or finished growing will not die naturally, and must be cut down with an axe if they need to be removed. When cut, a stump remains, which must be dug up with a shovel. In New Leaf, the stump will occasionally feature a unique pattern. The frequency of rare patterns is increased when a golden axe cuts down the tree, and even more so when a silver axe is used. Despite having been present since Animal Forest, stumps served no practical use until City Folk wherein certain bugs can be found on a stump. Beginning in New Leaf the player character and villagers can sit upon stumps.

In New Horizons, trees can now be relocated directly, instead of having to cut down and replant them, using stamina gained by consuming fruit. After eating a piece of fruit the character will be able to dig up a whole tree, and place it into their inventory. The tree can then be planted where the player wishes it to be located, within reason.

Trees can be shaken to dislodge objects. Fruit trees will drop fruit when they have any available to harvest. Any Hardwood or Cedar tree may drop one 100 bell coin, a wasp nest with wasps (5 per day), or a piece furniture (2 per day). Bagworms and spiders may also appear when shaking trees, hanging from the branches when disturbed. During the fall, Acorns may be found beneath trees in the village (WW and NH only).

Many bugs are only found on trees, or their stumps. Cicadas, beetles, and some other insects are only found hanging from the front of the trees. In Animal Crossing purple and birdwing butterflies will only appear at the canopy of a tree, they are not restricted in this way in later games. The Animal Forest e+ exclusive coconut crab is only found inside coconut tree branches.

In New Horizons, trees were vastly changed, in addition to the items available from them in past games, several new materials became available from trees. Any tree, including fruit trees, can be shaken any number of times a day to shake loose a tree branch, an essential component for many DIY recipes. Additionally, each day, a branch might be found under any non-fruit tree. Finally, when hit with an axe, a tree will dispense up to three pieces of wood.

During, and leading up to, Bunny Day, trees also have a chance of producing two different kinds of egg. Each day, a number of the island's hardwood trees will have three Leaf Eggs, which can be harvested in the same manner as normal fruit. Additionally, when hit with an axe, any tree may give a Wood Egg instead of a type of Wood. According to the villager's on a players island, coconut Trees may produce a higher amount of Wood Eggs than any other type of tree. It should also be noted that trees encountered during a mystery tour are also affected by this change.

The hardwood trees (also sometimes called oak trees) are a recurring, familiar symbol in the series. The leaves change colors to match the seasons, but usually change later than fruit trees. Hardwood trees will turn pink during the Cherry Blossom Festival, and they are implied to be source of cherry-blossom petals (New Horizons).

Hardwood trees are required in order for acorns to spawn during the respective time period (only in Wild World and New Horizons).

Hardwood Trees produce no fruit themselves (even acorns are not considered such) and thus cannot be reproduced by planting. However, the player can buy hardwood saplings at an applicable store. Additionally, there are several other ways to produce Hardwood Trees. Any money tree, once harvested, will become a regular hardwood tree, and in Animal Crossing one can simply bury 100 bells with a golden shovel to sprout a sapling.

This tree resembles the hardwood tree but bears three pieces of fruit. Once harvested, it will take three days for the tree to produce fruit again. Unlike non-fruit trees, acorns will not spawn under this type of tree, nor will they change color during the Cherry Blossom Festival.

The main types of fruit trees are apple, cherry, peach, pear and orange. These types of fruit are available in every game in the series. One of these fruits will be growing in a town when it is created; this is known as the native fruit. This fruit sells for the least of any other fruit in that town, 100 Bells. In New Horizons, a native fruit of any player's town can be viewed on their passport.

The player may then, through a number of means, obtain, plant, and grow each of the other fruits in their town. These fruits sell for 500 bells, significantly more for the effort of having to acquire and cultivate them.

Mangos, durians, lemons, lychees, and persimmons are exclusive to New Leaf (in the main series). They are referred to as tropical fruits (like coconuts and bananas) and can never be the native fruits of a player's town. One of these fruits will grow on Tortimer Island; the rest are available through island tours. They sell for modest price of 250 Bells.

In Pocket Camp, Grapes were added to the list of available fruit. While the native fruits are available throughout the game, the player will only have one of grapes, lemons, or lychees growing in their camp and nowhere else; similar to the main series games, the player must acquire the other two fruits elsewhere (Example: Buy it from other players through the Market Box).

There is a glitch in New Leaf in which a fruit tree holds less than three pieces of fruit.

The perfect fruit tree will die after four to seven harvests, leaving the player with a bare, dead looking tree. One of the fruits from the final harvest will be rotten and will require a fee to be disposed of. If the rotten fruit is planted, it will appear to be a wilted sapling and will die the next day.

A dead perfect fruit tree can be revived by planting fertilizer next to it, however the tree will revive as a normal fruit tree, not a perfect one.

These unique evergreen trees prefer the top half of the village mostly in higher altitudes and as such do not grow well near the coast.

Cedar trees produce no fruit, but their saplings can be bought from the applicable store in a player's town.

In almost all games, Cedar Trees can only be grown in the northern sections of the town, visually discernible as any location on the higher elevation of the town's Cliff. Any attempt to plant them on the lower elevations will cause the tree to wither and die.

In Wild World, there are no cliffs, and thus no real visual distinction can be made as to where exactly Cedar Trees will grow and where they will wither. This presents similar issues as when attempting to get a Perfect Town, but similar solutions are possible as well, if needed. Essentially, the trees will only grow in the northern half of the town, and will wither south of the halfway point.

In New Horizons, cliffs once again return, and are the only place that the trees will be by default, thus blocking the player's access to them until either their acquisition of the ladder or until they grow their own. Cedar trees that are fully grown may be relocated freely about the town, like any other tree in the game. During the fall season, pine trees may drop pinecones when shaken, a material used in seasonal recipes. During Festive Season, decorated cedar trees will drop ornaments required for festive diys recipes.

Cedar trees change color very little during the course of the year, but are decorated with Christmas lights around late December, Toy Day, and New Year's Eve.

Palm trees grow only two fruit. They can only be planted on or near the beach, in this way they are opposite Cedar Trees in their distribution. Like regular fruit trees, Palms will require three days to restore their fruit after harvest.

In most games there is only one type of palm tree: Coconuts. Coconuts can be obtained through several different means depending on the game in question. In Animal Crossing, they are available on Animal Island. In Wild World and City Folk, they will occasionally wash up on the town's beach. In New Leaf they can be obtained from Tortimer Island or an Island Tour. Finally, in New Horizons, coconuts can be obtained during most mystery tours.

In New Leaf, there are two types of palm trees: coconut palms, and banana palms. Tortimer Island will randomly have one of these fruits, while the other can be obtained during an island tour.

There are some beetles that only appear on palm trees, such as the hercules beetle, cyclommatus, and goliath beetle.

A money tree is a rare tree that bears money as its fruit. They can be grown by burying Bells in the ground in a glowing spotPGNH or using a golden shovelWWCFNH.

In most games, the chances of making a profit with a money tree is very risky. Even if the tree fully grows, there is only a small chance that the money will grow on the tree. In New Horizons, trees are much more likely to give a return on investment, including a guarantee up until 30000 bells buried.

Once a money tree has been harvested, or fails to produce, it becomes a normal, hardwood tree.

This golden-colored hardwood tree only appeared in Animal Forest+, Animal Crossing, and Animal Forest e+. It could be grown by planting a shovel in a glowing spot. Once the tree is fully grown, golden shovels grow from it.

Many bugs can be found using Trees to their advantage. You can find them on tree trunks, inside trees and on tree stumps. 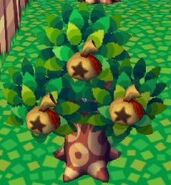 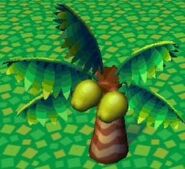 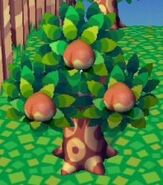 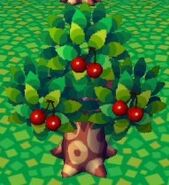 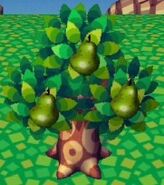 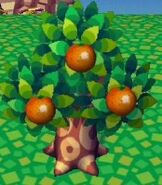 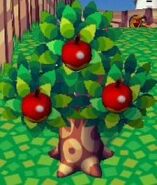 An Apple Tree
Banana Tree.jpg
Add a photo to this gallery

A tree from Animal Crossing City Folk and a tree from the old build of New Leaf.

A chart showing the seasonal changes to a tree in New Leaf.

A player with many nursery saplings, in New Horizons.
Add a photo to this gallery

Retrieved from "https://animalcrossing.fandom.com/wiki/Tree?oldid=539528"
Community content is available under CC-BY-SA unless otherwise noted.