(Can be Female as well)

Human
Villager (むらびと Murabito) is the Animal Crossing series playable character in Super Smash Bros. 4 and Super Smash Bros. Ultimate. They appear as human player characters from Wild World and City Folk with an artistic style as seen in New Leaf. Both female and male style villager can be controlled.

In Super Smash Bros. for Nintendo Wii U and Nintendo 3DS

According to Masahiro Sakurai, director of the Super Smash Bros. series, the Villagers' abilities were inspired by the Animal Crossing series' theme of collecting. Their arsenal includes the many tools seen in Animal Crossing including the shovel, slingshot, axe, and net. Their attacks also make use of more general items and furniture, such as an umbrella, a stick, fireworks, a bowling ball  and even weeds. The Villager will be able to launch some kind of Lloid-based missile at other characters.

Their collection of improvised weapons does not appear to be limited to Animal Crossing items. They have also been using items such as the balloon helmet from Balloon Fight and a boxing glove that may be a nod to Punch-Out!!. Both of these titles made appearances as playable NES Games in Animal Crossing.

Their neutral special allows them to pick up and pocket any item or projectile thrown towards them, which they can later use once at any time. These include stage items such as the Capsule as well as projectiles generated by other characters, such as Mario's Fireball.

Their Final Smash was revealed to be Dream Home. During the attack, the player entraps nearby opponents into the construction of a House, in this case, one that seems like a standard mansion style home. During the attack, the player is seen giving Bells to Tom Nook and Timmy and Tommy, who are then seen building the home. The attack ends with the Player and the Tanukis celebrating the completed house before it explodes, sending the trapped opponents (And Tom Nook and the Nooklings) flying.

Villager's design is based some of the default characters from Wild World, and are also on the box art of City Folk They have short legs and an exaggerated head, like all characters in games before New Leaf where the proportions were changed to accommodate lower body clothing. Their attire includes the default clothing.

Villager has been confirmed as a DLC character, along with Isabelle, for Mario Kart 8, and was available to purchase on April 23, 2015.

While the Villager himself does not make a physical appearance in the Welcome amiibo update in Animal Crossing New Leaf, scanning his amiibo will make Wisp comment that it is legendary, and despite being unable to bring the Villager himself to the Campground, Wisp makes up by bringing in an RV filled with various Nintendo based furniture, including the "Villager Statue" that has the same appearance and pose of the Villager amiibo.

Villager returns as a veteran fighter in Super Smash Bros. Ultimate. Both male and female variants are once again playable, as well as the addition of more skin tones, a feature not entirely officially implemented in the Animal Crossing series until New Horizons. Isabelle also joins the battle as a playable character in Ultimate, and the only other Animal Crossing fighter representative.

The male Villager receiving his Super Smash Bros. invitation in the announcement trailer.

Villager grabbing Mario with his net in the announcement trailer.

A selection of villagers.

The rest of the villagers, with Brewster and Tom Nook looking on from the background.

The ending of Villager's Final Smash before exploding. 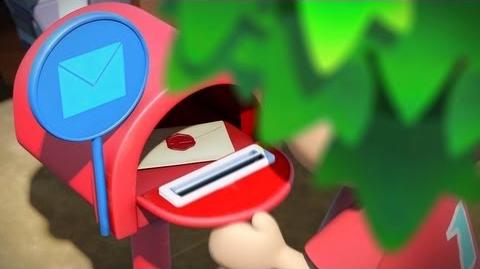