The walking leaf (コノハムシ, Konoha-mushi?) is a rare to uncommon bug that was introduced in City Folk. They are found from July to September, from 8am to 5pm and can be found in all weather (rain and sun) but are more common in rain, perhaps because there are less bugs that linger in this weather. They camouflage themselves as furniture leaves (though appear a lighter shade of green) on the ground, but when approached they will flip over and reveal themselves. They are a counterpart to the walkingstick, and sell for the same price.

Upon donation to the Museum, Blathers will say:

"As you can see, walking leafs are extremely proficient at mimicking the appearance of leaves. What torments me is this: they also EAT leaves... Do they look at one another and think, "mmmmmmmm"?"

After donation, the walking leaf can be found on the middle-terrace of the bug exhibit, in the central enclosure near the eastern-most tree stump, sharing its enclosure with the grasshopper.

"Walking leaves look just like real leaves. They're related to walking sticks, which resemble twigs. The females are better at mimicking leaves than the males, though they can't fly. Their mimicking is so thorough that some of them even have fake bite marks on their bodies."

After donating, the walking leaf can be found in the upper right room in the bug exhibit, walking around in the top right corner.

In New Horizons, upon donation or selecting "Tell me about this!", Blathers the curator will say (with abhorrence):

"What a fraud! What a phony! The walking leaf is, in fact, the very embodiment of a lie! This master mimic looks like a tree leaf all the way down to the tiniest details. In fact, this bug has been known to sway to and fro as it walks...just so it looks like a leaf blown by the wind! And the fakery works! These insects look so much like leaves that even leaf-eating insects nibble on them! Lying liars, indeed!" 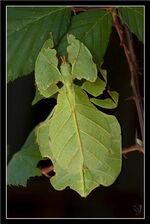 Phyllium bioculatum, also known as Gray's leaf insect, is an Asian species known as konoha-mushi (コノハムシ?"leaf insect"). Walking leaves are considered to show the best leaf mimics in the entire animal kingdom, so well that some even show signs of fake bite marks, to further confuse predators. When they walk, they sway to mimic a leaf being rocked by the wind. They can be found in South/Southeast Asia to Australia. A 47 million year old fossil found of a leaf insect shows that little has changed within the Phyliidae family, with this fossil showing traits found in the modern day walking leaves. Walking leaves also have a diet of blackberries and other small fruits.