All year
All day

The wasp (ハチ Hachi?, Wasp) (bee prior to New Horizons) is a "harmful" bug introduced in Animal Crossing. Though wasps appear in large numbers, they can only be caught in singular form, like ants. Once a wasp is caught, the other wasps in the swarm will dissipate.

Wasps are not visible unless their nest is disturbed by shaking, or by chopping with an axe. Once the nest falls, wasps will emerge. Only five wasp nests are generated each day, but they cannot be found if the wireless gate is open and/or other players are inside the town. In New Leaf, beehives can appear in any trees including fruit trees, whereas in previous games only regular non-fruit trees can hold them.

In New Leaf, beehives can be picked up and sold for 500 Bells. In New Horizons, the wasp nest's value has decreased to 300 Bells, but it can be used in a DIY recipe with 3 clumps of weeds to craft medicine.

Wasps, once agitated, will chase the player until the player catches them with a net, enters a building, quits the game, or, in New Leaf, saves and continues. Wasps follow the player and travel faster than running speed, however they are fairly slow to turn which can be used to the advantage of the player. In most games, a simple 5-second run from the tree, net equip, and net swing into the swarm is sufficient to catch them if the timing is right. In New Leaf, it is possible to hit the beehive with the net and catch the bee before they can swarm.

If the wasps catch and sting the player, the player's left eyelid will swell; in New Horizons, if the player is stung a second time while their eyelid is already swollen, they will pass out and be returned to the front of their house, much like with scorpion or tarantula attacks. Villagers will comment on the player's condition and appearance if spoken to and may offer the player a bag of medicine. In New Horizons, the player will instead receive the DIY recipe card for medicine from a villager the first time they speak to one while stung. If the player tries to talk to a villager while the wasps are still in pursuit, the villager will make a frightened comment about the approaching swarm. This trait is shared with scorpions and tarantulas.

"Why, I'd imagine it took more than a bit of skill and daring to catch bees! You've got 'moxie,' as I believe they say. I'm certain you must have been stung numerous times. How terribly painful that must have been, eh wot? Incidentally, do you know how some honeybees protect their hives when attacked by giant wasps? The giant wasps can't survive heats above 113 degrees, but the honeybees can live at heats up to 122 degrees. The canny honeybees use this nine-degree difference to their fullest advantage, wot! When the wasps arrive, the bees attack them en masse. A single wasp may be swarmed by up to 500 bees! Now this is truly amazing. The bees then begin to vibrate, creating a veritable cocoon of suffocating heat. Do you see the genius at work here? This swarming is but a feverish defense against the giant wasps' weakness. The temperature? Hoo hoo! Lo and behold, 120 degrees! Just below the bees own threshold of survival! In this incredible fashion, the honeybees literally lay their lives on the line to protect the hive! Stupendous! To be honest, I learned that from a wee documentary I saw on the telly! Of course, incredible feats can only go so far. When all is said and done, they're still insects, and still ghastly!"

"I once thought that its stinger was a bee's lone defense, but... I've recently heard that they also possess terribly repulsive breath! Of course, the gent who told me this was a bit of a rabid liar, but still! I would heartily endorse the following action if you see another: FLEE LIKE MAD! Stingers and bad breath, honestly! What monstrous little beasties..."

"It can be quite dangerous to receive a large dose of bee venom-- for example, by being stung. That said, did you know that same substance is actually used in some women's perfumes? Indeed! A potent venom and a potent perfume... Which do you suppose is more devastating, wot?"

The bee can be found buzzing about on the highest tier of the bug room, among the trees.

"Bees are prone to attacking anyone who comes too close to their hive, so be careful when approaching! The yellow and black you see on their bodies are colors often used to convey danger. This danger is pretty significant, as many varieties of bees are capable of stinging multiple times."

The bee can be found flying from tree to tree along the back wall of the museum's bug exhibit. It will occasionally leave the tree and fly around for a bit before returning to its hive.

"Hoo! Allow me to share a fact with you! Wasps are sometimes called "meat bees" because... They. Eat. MEAT! MEAT! Of almost any sort! Surely you've seen what a menace they make of themselves at picnics. 'Tis hardly the worst of it, wot wot! Aggressive predators with venomous stingers, wasps not only hunt and eat other insects...they paralyze their prey, then drag their victims home ALIVE, leaving them for their larva to feed upon. Suddenly a simple sting seems quite tolerable."

The wasp can be found just above the main entrance to the museum's insect exhibits. Its nest hangs from a tree to the right of the bagworm's tree, with a small lamp post just underneath it.

Second part of catching the bee in Animal Forest e+.

A player being stung in Wild World

A player being stung in City Folk. 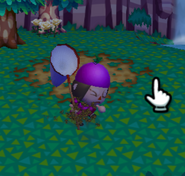 The player getting stung by bees

Catching a bee in City Folk

Catching a bee in New Leaf.

A player after being stung by bees.

Catching a bee in ACNH
Add a photo to this gallery

Though they are called bees in-game, the stinging insects that appear when shaking trees are actually Japanese giant hornets. The Japanese giant hornet is the largest species of wasp in the world, and can reach a length of over 5 cm. The name "bee" in the Animal Crossing series is a mistranslation: the Japanese name はち hachi refers to both wasps and bees, though the term "bee" is also colloquially applied to wasps in English-speaking communities despite their taxonomic differences. This wasp preys on hives of honeybees: once one has located a hive, it sprays it with chemicals which attract other wasps. Together, they can destroy entire hives of thirty thousand bees or more in less than four hours. Their sting can be very dangerous, as not only are these wasps are very aggressive and sting many times, but their venom also contains a potent toxin strong enough to corrode flesh. Because of this, a sufficient amount of stings can cause serious medical complications such as renal failure. It is estimated that around 30 people die in Japan every year as a result of giant hornet stings.

Retrieved from "https://animalcrossing.fandom.com/wiki/Wasp?oldid=410067"
Community content is available under CC-BY-SA unless otherwise noted.