Animal Crossing Wiki
Register
Don't have an account?
Sign In
Advertisement
in: Image requested, Articles in need of cleanup, Tool

Watering cans are used to water flowers to prevent them from wilting and dying, or to promote hybridization and the breeding of new flowers. When a wilted flower is watered, it will return to life the following day.

The player must stand next to a flower to water it. A watered flower will show water droplets dropping to the ground, followed by sparkles indicating that it has been watered.

Watering flowers with the watering can is considered crucial to having and maintaining a perfect town environment, because it keeps flowers thriving and helps promote new growth (including hybrid flowers).

In games where the silver and gold watering cans exist, they come with special properties that can be useful to the player. For instance, the silver watering can revive red turnips in City Folk, while the golden watering can has a chance to produce golden roses when wilted black roses are watered with it.

In New Leaf, the function of the improved watering cans vary from the previous games, and the Beautiful Town Ordinance removes the necessity of using a watering can on flowers (they do not wilt when it is in effect).

In New Horizons, flowers no longer wilt by default, and only need to be watered to produce hybrids. A black rose that has been watered once by a gold watering can has a 50% chance of producing a gold rose until it produces one. Better watering cans water more tiles at once.

Below are the watering cans in Wild World:

Below are the watering cans in City Folk:

Below are the watering cans in New Leaf:

Below are the watering cans in New Horizons: 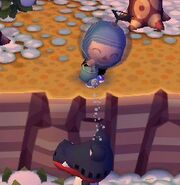 A player watering Del. Note that using the Watering Can on a Villager shows no effect.

A player demonstrating the range of the Silver Watering Can.

Acquired the golden watering can.

The Golden Watering Can spreads water around the player.

A player demonstrates the range of the Golden Watering Can.

A player watering his roses while sitting on a bench. 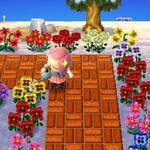 Watering Flowers with a normal watering can.