Animal Crossing Wiki
Register
Don't have an account?
Sign In
Advertisement
in: Articles in need of cleanup, Under construction, Flora, Turnips
English

White turnips are a unique type of flora present in every Animal Crossing series game to date. They can be purchased every Sunday morning before 12 p.m. from Joan or Daisy Mae depending on the game. Unlike other items, the price of turnips fluctuates over time. The purchase price will be different every week. During the week, the player can sell turnips at different prices to make a profit. These prices will differ each morning and afternoon. This trade is nicknamed the Stalk Market.

Turnips must be sold within a week. Otherwise, they will rot by the following Sunday and lose their monetary value, regardless of stacks. Changing the game time or date will also cause spoiling, hence Joan's warning that the turnips "are highly sensitive to time paradoxes." In some games, some glitches prevent turnips from rotting.

If spoiled turnips are dropped on the ground outside, they will attract ants, cockroaches, (GCN) and flies (Wild World and beyond). Like other "garbage" type items, when sold to Reese, she will charge a disposal fee of 400 Bells.

Turnips are purchased from the local trader Joan, a special character who wanders the town from 9 a.m. till noon on Sundays. She sells turnips in bundles of 10, at a weekly random price in the range of 90-110 Bells per Turnip. Unlike red turnips, white turnips can be bought in unlimited quantities.

Joan will not sell turnips if the player has recently changed the game time, explaining that she is out of stock for both white and red turnips. However, changing the console time directly rather than in-game can avoid this penalty.

White turnips are sold like any other item. In earlier games, Tom Nook is the middleman for selling turnips; in New Leaf, this role is taken by Reese. As with real-life stock trading, the exchange rate for turnips fluctuates. The price changes twice a day, first at the beginning of a new in-game day, and again at noon.

Selling prices for turnips vary from as low as 15 Bells a turnip to as high as 990, but prices frequently range between 50 and 200. High investments in turnips that are sold at extremely high prices can quickly turn into several millions of Bells of profit in a few weeks.

Though prices are random, there is a loose tendency for them to rise from Monday through Wednesday and then drop Thursday through Saturday. Turnips cannot be sold on Sunday because turnip prices cannot establish on a Sunday.

In New Leaf, the Stalk Market can be somewhat predicted, adhering to one of the four following patterns:

Buying and selling in New Horizons

Turnips in New Horizons are purchased from Daisy Mae, the granddaughter of Joan from previous entries. She wanders the player's island on Sundays from 5 a.m to 12 p.m. to sell the player white turnips. She may still be present on the island after 12 p.m. but she will not sell the player anything. Like her grandmother, Daisy Mae will sell turnips at a random price between 90 and 110 bells.

Timmy and Tommy in Nook's Cranny will buy turnips every day, except for Sundays, at a different price every morning (before 12 p.m.) and every afternoon (12pm-10pm). Their price may be as low as 9 Bells, and as high as 660 Bells.

Time travel has no effect on changing the price that week. However, time traveling backwards in time will rot any turnips the player has purchased.

In New Horizons, the Stalk Market follows the 4 following patterns: Random, Large Spike, Decreasing, and Small Spike. The pattern from the previous week will impact the likelihood of the following week's pattern.

From this we can calculate the eventual percentage of occurrences for each pattern (rounded, accurate to within 1%). If you do not know anything about previous patterns, these are the probabilities for each pattern occurring on a given week.

The 4 patterns are as follows:


In a Random Pattern, your maximum profit will only ever be 140% of whatever your base price was. Your best bet here (if you don’t have any friends whose island you can visit) is to sell the moment it is higher than your buying price. Unless of course, RNG is not in your favor, and during the Increasing Phase, you always get 90% of your base price. But that likelihood is low. You are much more likely to either break even or make a semi-decent profit.
This pattern follows 6 phases in order:

This is the worst pattern of the four and if you find you are caught in this your best bet is to either sell immediately or find a friend and sell on their island. Every day you wait, you will lose more and more profit. Monday morning's price will be 85%-90% of your Base Rate, and it will decrease 3%-5% each day. If you are lucky, the turnip price may be lower than 100 and you can separate your turnips so that they will not rot in stacks, and you will get a small profit.

3. Large Spike The most profitable pattern.

This isn’t as exciting as the Large Spike pattern but you will be happy to be in this one as they share similarities. When the second phase of this pattern kicks in players can expect profit.
This pattern contains three main phases:

This information was compiled by /u/Edricus with datamining by Ninji on April 1st, 2020. The doc on the original findings is here: https://docs.google.com/document/d/1bSVNpOnH_dKxkAGr718-iqh8s8Z0qQ54L-0mD-lbrXo/edit

When the player changes the time in Animal Crossing, Joan will arrive in town out of stock for both turnip types, a consequence of attempting to exploit time travel. A workaround for this is changing the Wii/DS time forward a minute, re-synchronizing the game time with the console time. However, to buy Joan's turnips will require waiting a week until she visits again.

In Wild World, placing turnips on a table inside the player's house can prevent them from rotting. To do this, first, the player must drop a tool in front of the table, then drop the turnip which should land on the table. If the table trick is attempted, the turnips will not spoil overnight.

In Animal Crossing, if the player has turnips in their inventory and they travel on the train to a village with clock settings earlier in time than the most recent Sunday in the traveling character's town, they will turn spoiled when arriving at the destination.

In New Leaf, this no longer occurs. This potentially allows for infinite profit, as two people (or one person with two systems) can, in theory, have one game with Joan currently in town and another with a high turnip price at Re-Tail (ideally 500+), and travel between the two with no consequence.

Player with pockets of turnips in New Leaf 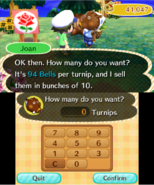