This article is about snooty wolf. For the for the the special character, see Blanca. For the peppy tiger villager, see Bianca.


This is about the snooty wolf villager. For the special character, see Blanca. For the peppy tiger villager, see Bianca.

A home bathed in white

Mocha,
A little bit of milk,
One spoonful of sugar

“If you even THINK about crossing me, just think about these pearly whites!”

Whitney (ビアンカ Bianka?, Bianca) is a snooty wolf villager in the Animal Crossing series. She appeared in the Dōbutsu no Mori movie. Her name may come from the fact that her fur color is white. Her Wild World picture quote refers to Animal Crossing, and thinks it's about crossing animals. Her New Leaf picture quote is a reference to the story The Boy Who Cried Wolf. She has the fashion hobby.

Whitney is an arctic (white) wolf, with blue eyes with magenta makeup, unlike in Dōbutsu no Mori, where her eyes are lavender, and a curled tuft of fur on her forehead. She has grey eyebrows by her tuft of hair. She wears pink eyeliner, eye shadow, and mascara, and also has gray-tipped snout fluff and tail. Her nose is red-brown unlike in the movie where it is a deep brown. Her tail is long (with very dark grey on the end) and spiky at the tip. Her eyebrows appear sharp and her ears are fantasy rose pink on the inside. She also has a dazzler cosmos flower on her top-right ear in Dōbutsu no Mori, but it doesn't appear in the Animal Crossing games.

Whitney has a snooty personality, which means she loves make-up and gossiping. As a snooty villager, Whitney will first appear rude and arrogant towards the player, often talking about herself and her own experiences. She also speaks about the style and appearance of other villagers, usually other female villagers such as normal, peppy, and other snooty villagers. She will soon warm up to the player, confiding in them about their own feelings but still keeping subtly rude. Whitney will not get along with lazy villagers due to them not caring about their appearance or the lazy villagers hating what she eats, and she won't get along with jock villagers because they will question her on her physical appearance and they won't worry about fashion. However, she will get along with cranky villagers due to their similar rude personalities, and usually normal villagers as well.

Whitney has the Round Carpet and a Stone Wall in her house. She has a fireplace, Cabana Lamp, Classic Clock, Classic Wardrobe, Classic Bed, and a Baby Bear. She has no music when she first moves in. She seems to like rustic-themed items, otherwise known as chic in the game. She also likes white furniture of which she may ask you for some if you talk to her enough. Her house has Lucky K.K. playing in it, when you give her a stereo.

Whitney struts with the confidence of someone who knows every second of every day that her fur game is on point.

At level 7 friendship, she will reward you with a floral knit tee and sparkle stones (x1).

At level 15, she will request that you craft a bell.

At level 20, she will reward you with pic of Whitney and sparkle stones (x1).

At level 35, she will reward you with sparkle stones (x1).

At level 40, she will reward you with sparkle stones (x1).

At level 45, she will reward you with sparkle stones (x1).

In the movie, Whitney is very sophisticated, posh and kind, unlike her typical snooty personality in the Animal Crossing games. Whitney's appearance also slightly changes - the movie gives her body an hourglass shape and increases her height, and the red cosmos in her ear is now gone. In the movie she is under the name Bianca, unless it's the English fan dub.

Ai first meets Whitney on her deliveries. Before dropping off Whitney's order, she offers to give Ai tips to be more of a "polished lady" and winks, to which an awed Ai blushes. Ai later whispers to herself of how beautiful she was. When chatting with Rosie and Margie at the beach, Ai learns, via rumor, that the cranky villager, Apollo, could have possibly been dating Whitney. Later when, saddened by her friend's sudden leave, Ai walks to The Roost to have some coffee for her troubles. Whitney, knowing of Margie's departure, consoles Ai, saying to believe in herself; Ai and Margie's bond shall never fade. When in The Roost, Whitney compares how a woman's bond and a relationship differs, and no matter what she does, it will never return to what she loved and cared about. This proves that Whitney has indeed been in a relationship and, due to the rumor, was most likely with Apollo. This is implied in the credits when she receives blue roses as a gift, which Apollo happened to be growing, another point being that on her parosel, when on the beach the pattern seems to have blue roses, another signal towards their relationship. When Gulliver's UFO crash lands, Whitney appears garbed in winter clothing and offers to search for a UFO part near the ocean. Like all of the other villagers, Whitney appeared at the Fireworks Festival, donning a kimono, which was the only time in the film her flower was shown.

Whitney at The Roost after Ai leaves.
Add a photo to this gallery

A plastic figurine of Wild World that features {{AM}} characters.

The box for the Wild World figurine set. 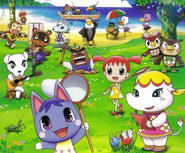 Retrieved from "https://animalcrossing.fandom.com/wiki/Whitney?oldid=467459"
Community content is available under CC-BY-SA unless otherwise noted.