Wii U
The Wii[1], also known as Codename Revolution is Nintendo's fifth home gaming console, and was competing with the Xbox 360 and the PlayStation 3 in the seventh generation of video games. The console was first released in late 2006. The main input for the console is the controller, called the Wii Remote which has motion and tilt sensitivity, and a plug for control extensions on the bottom. The console has an installment in the Animal Crossing series series, titled City Folk released on November 16th 2008 (December 5th for PAL regions). While City Folk was released specifically for the Wii, players can also play the original Animal Crossing on the Wii due to its backwards compatibility. Japanese players can also play Animal Forest+ and Animal Forest e+ on their Wii consoles.

The Wii has various methods of inputting commands like the Wii Remote (MotionPlus/Plus), Nunchuk, and the GameCube (GCN) controller.

The Mii Channel is one of the preinstalled channels for the Wii. It was released in North America on November 9, 2006, in Japan on December 2, 2006, in Australia on December 7, 2006, and in Europe on Decmber 8, 2006. On the Mii Channel, players can create Miis, virtual characters that can represent them. In City Folk, players can get a Mii Mask at Shampoodle by selecting "Makeover." The first makeover is free, while any more after that cost 3,000 Bells.

The Nintendo Channel is another channel for the Wii console. It gives the user updates on new games and videos. In the City Folk section there are videos to help keep track of the latest info.

On May 20, 2014, all Nintendo Wi-Fi access was terminated and no longer provides service for Nintendo DS(i) and Wii users.

At E3 on the date of June 7, 2011, Nintendo announced a new Nintendo console named the "Wii U". It is Nintendo's sixth home console with 1080p HD Graphics (first for a Nintendo console) and a controller with an embedded touchscreen, which allows the player to continue a gaming session by displaying the game on the touchscreen (a feature dubbed "Off TV Play" after its release). The Wii U is backwards-compatible with Wii games, but not GameCube games.

The Wii U was released in November 2012, beginning the eighth generation of video game consoles. 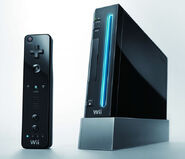 Wii Mini
Add a photo to this gallery

Animal Crossing City Folk
Add a photo to this gallery

Retrieved from "https://animalcrossing.fandom.com/wiki/Wii?oldid=526578"
Community content is available under CC-BY-SA unless otherwise noted.