Wilbur (ロドリー, Rodrī) is a dodo special character who serves as a pilot for Dodo Airlines in Animal Crossing: New Horizons. He allows the player to go on different Island Tours. He refers to himself as "stovetop rubber band" and the player as "bellbottom bebop" amongst several other nicknames.

Wilbur is a dodo with blue feathers. He has a large yellow beak, with a brown tip. Wilbur's outfit consists of a pilot's uniform. He has a white shirt with a red tie. Also, he wears a black belt, with a small pouch attached to it. Unlike his brother, Wilbur wears large aviator sunglasses. He wears a headset to communicate with his brother.

Wilbur is a pilot for Dodo Airlines in New Horizons, taking the player on island tours and to visit other towns via the Airport. He often speaks in an apparently incomprehensible jargon related to pilots, including the common phrase "Roger!" This includes referring to the player as "bellbottom bebop", "bellbottom folk", and "trainwreck blueberry pie" and himself as "stovetop rubber band", "stovetop saltshaker", and "tango boxing is go". He will ask the player if they "wanna bust bunson burners and bounce back to [Fruittown] (e.g. Orangetown)?" or "punt pontoons and fly Soaring Lily here back to [Town]" amongst other colloquialism. He also uses the NATO Phonetic Alphabet with modifications to keep the game family-friendly, changing the word for "W" from Whiskey to Whisker. Upon arrival at an island he says, "Alright, we are two down and docked at the target island. Delta Oscar Delta Oscar is go." And when leaving the island, saying "Roger! Lifting off November Oscar Whisker." He maintains a very militaristic and precise relationship with Orville, the ground control to ensure all flights run smoothly. Upon arrival at a deserted island, Wilbur will sell the player certain tools for Nook Miles.

Wilbur talking to the player. 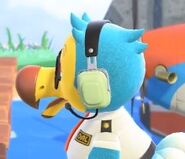 Wilbur talking to the player at a different angle

Wilbur talking to the Player after they wake up from fainting.

Wilbur talking to the Player after they wake up from fainting.

Interacting with Wilbur
Add a photo to this gallery

Retrieved from "https://animalcrossing.fandom.com/wiki/Wilbur?oldid=455905"
Community content is available under CC-BY-SA unless otherwise noted.