The windmill is a landmark that appears in Animal Forest, City Folk, Pocket Camp and New Leaf.

In Animal Forest and City Folk

When 1,000,000 Bells are donated to the Town Fund, a lighthouse or a windmill will appear in the player's town after a week. The player can vote between the the two by talking to Pelly. The windmill will automatically be placed on the peninsula of the town by the beach. A windmill gives the player a higher town rating. 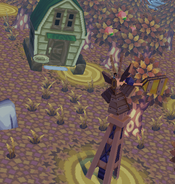 A windmill in Animal Forest.

The windmill in City Folk.

A windmill in New Leaf.
Add a photo to this gallery
This article is a stub. You can help Animal Crossing Wiki by expanding it.
Retrieved from "https://animalcrossing.fandom.com/wiki/Windmill?oldid=452123"
Community content is available under CC-BY-SA unless otherwise noted.