Wisp (ゆうたろう, Yūtarō?) is a spirit special character that appears in the Animal Crossing series in the early hours of the morning, usually between 12am and 4am; in New Horizons, he appears between 8pm and 4am. He is absent in Animal Forest, Wild World, and initially New Leaf, though was added to the latter game in the Welcome amiibo update.

Wisp is a white ghost roughly spherical in shape, about the same size as the player. What he was before he became a ghost is unknown. For an unspecified reason, he can only appear at night. In City Folk and New Leaf, Wisp is connected to a genie lamp. Wisp works for an unspecified location and is said to have a scary boss, who he is afraid of. Wisp often needs the player to collect five spirits which are roaming around the town. In Hohinda Mura Dayori, villagers describe Wisp's spirit orbs as being cold and refreshing, and that could be used instead of an air conditioner. Between New Leaf and New Horizons, Wisp found himself stranded alone on the deserted island.

As a reward he gets rid of all weeds in town, paints the player's roof, gives out an item, or in later versions of the game, kills all the roaches in the player's house.

In Animal Crossing, the player will need to capture 5 spirits roaming around the town, and return them to Wisp (who stays in the same acre he is found in). He will only appear if there are 8 or more weeds around town. His reward is one of three things:

In City Folk, the player will have to find the empty lamp somewhere in the town. The rewards Wisp gives are essentially the same as in Animal Crossing, only the roof painting was changed to the ability to smash roaches, as the roof paint could be bought from all of Tom Nook's stores (apart from Nook's Cranny), and the random item reward has been updated to give the player a chance to get a random accessory or hat, which they may not already have available in their catalogue. However, the item is usually not rare. Also, if the player doesn't have it in their catalog and they select hat then Wisp will give the player a turban instead.

Originally, Wisp was completely absent from New Leaf. However, he was included in the Welcome Amiibo update.

About a matter of 1-4 days after the update is downloaded, unknown circumstances while the player is wandering around their town can cause Wisp's voice to call for them. If they follow his voice, they will discover his lamp, which he asks them to take to a private place (their house) to be opened. The lamp functions as a piece of furniture and can be placed upon tables. If it's interacted with, Wisp will emerge. However, he is unable to stay outside of his lamp without possessing the body of a villager, so he requests that the player scans an amiibo. If the amiibo is compatible, Wisp will turn into that character.

What happens next depends on the type of amiibo scanned. If amiibo Cards from the Welcome Amiibo series or figures based on characters from the Splatoon, Monster Hunter, and The Legend of Zelda series are scanned, Wisp will give two options for a wish: "Come play" or "Give me something". If "Come play" is selected, the character will appear inside of an RV at the campground. If "Give me something" is selected, Wisp will give the player an item.

If a special character's amiibo Card from the Animal Crossing series is scanned, Wisp will give the player the option to either receive the character's picture or to receive an item.

If an Animal Crossing series amiibo figure is scanned, Wisp will give one option for a wish: "Come and visit". If this option is selected, the character will appear at the campground in an RV. If the player visits this character's workplace while they're camping, they will be replaced with Wisp. However, Wisp cannot do their job and asks that the player return when the right person is back.

Note: Wisp can only accept one request from the player per day (e.g. one item, one invitation to the campground etc.) After that he cannot be summoned until the next day.

On certain nights between 8pm and 4am, sometimes multiple nights in the same week, the player will encounter Wisp on a random part of the deserted island. Ironically, Wisp is afraid of ghosts and will confuse the player for one when approached, causing him to become startled and his spirit to split into 5 spirit pieces that scatter around the island. In the first encounter, Wisp will explain that he has been alone on the island for a very long time, and the player is the first person he has met there, hence his surprise.

At every meeting, Wisp will ask the player to retrieve his 5 spirit pieces in exchange for a reward. The spirit pieces can be captured with a Net, but they are not stationary and will slowly drift about the island. After the player returns to Wisp with all 5 pieces, he will then ask if the player wants an expensive item for the reward, or an item they do not currently own. Choosing an expensive item does not guarantee a valuable reward, and a cheap item or one the player already has may be given instead; Wisp warns that he has difficulty discerning the value of things. Wisp will occasionally also mention that the item will be chosen from a specific theme, such as flooring or furniture. Once all is done, Wisp says he hopes to cross paths with the player again, and disappears. 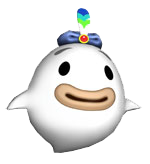 Wisp in a player's attic.

Wisp convincing the player to find his lamp.

Wisp bragging about his entrance.
Add a photo to this gallery 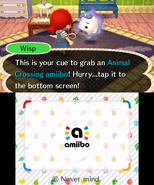 Wisp fills in for Mabel while she takes a vacation

The player cannot make purchases or receive patterns while Wisp is running the shop.

Magic lamp icon in New Leaf.
Add a photo to this gallery

Wisp is frightened about the player being a ghost.

Talking to Wisp without his spirit.

The front of a spiritless Wisp.

Giving back his five spirit pieces.

Wisp back to normal.

Wisp giving the player a farewell.
Add a photo to this gallery

Wisp talking to the player.
Add a photo to this gallery

Retrieved from "https://animalcrossing.fandom.com/wiki/Wisp?oldid=449427"
Community content is available under CC-BY-SA unless otherwise noted.